Temperature is a measure of how hot a body is and a scale has to be needed to accurately determined its temperature.

First, a measurable physical property, X has to be selected that varies continuously with temperature.
Next, two standard temperature, called fixed points are chosen to create a linear scale. X is measure at upper fixed point, namely, boiling point of water and lower fixed  point namely, freezing point of water.
Temperature values are them assigned to upper and lower fixed points. For celsius scale, a temperature value of 100 is given to boiling water and a value of 0 is assigned to the freezing point. To find unknown temperature, Ti, simply measure Xi and plug into the following equation.

This method hinges on the assumption that a physical property varies linearly with temperature.

The Specific heat capacity of a solid or liquid is defined as the heat required to raise unit mass of substance by one degree of temperature.

Thermal expansion coefficient is the percentage of dimensional change one can expect per unit increase in temperature. The coefficient is measure with a silatometer which records the change in a sample length over a range of temperature.

where q is the heat flux and is measure in energy/(time. area); T, the temperature (K); X, the distance in the x-direction; and k is the constant of proportionality. 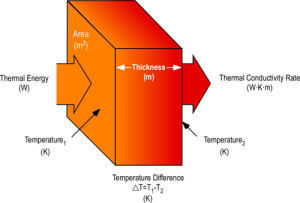 There are a number of ways to measure thermal conductivity. In general, the steady-state techniques perform a measurement when the material that is analyzed is in complete equilibrium. The disadvantage is that it takes a long time to reach the required equilibrium.

In many physical phenomena heat is exchanged. Thermal sensor display some specific positive characteristics and those are given below.
Extreme stability
No moving parts
Large dynamic
Little or no energy consumption
The above mentioned characteristics will improve the reliability of measurement and control systems in which they are used. Below a common type of heat flux sensor, called thermopile, is used to explain some principles of measurement.

Heat flux is induced by a temperature gradient across the sensor. The temperature difference is measured by a thermopile.

The absorber absorbs radiation. The radiation is converted into heat. The heat flux to the heat sink is measured by the thermopile.

A certain amount of heat is generated by a resistor. The ratio between the heat that flows to the heat sink and the heat that was originally generated is a measure for the mass flow. This ratio can be determined using a thermopile.

Thermal properties of materials smoothen the calculation of the following properties.

Materials at high temperature serve the needs of those who develop and use materials for high temperature applications. The industrial sectors covered include metal extraction, alloy manufacture, chemical processing, power engineering, engine and furnace industries, Within these sectors, the effect of high temperatures on materials performance, particularly creep, fatifue, strength, oxidation, corrosion and wear processes falls within the remit of the research publication.

The term “super-alloy” was first used shortly after the world war II to describe a group of alloys developed for use in turbo superchargers and aircraft turbine engines that required high performance at elevated temperatures.

The R-value of material is its resistance to heat flow and is an indication of its ability to insulate. It is used as a standard way of telling how good a material will insulate. The higher the R-value, the better the insulation is.