In reality, crystals are never perfect and contain various types of imperfection and defects, which affect many of their physical mechanical properties. The classifications of crystal imperfections are frequently made according to the geometry or dimensionality of the defects in crystal, the details of which are summarized below.

Types of Defects in Crystal

Point defects are localized disruptions in otherwise perfect atomic or ionic arrangements in crystal structure. These imperfection may be introduced by movement of atoms or ions.

This is the simplest point defect. In this system, an atom is missing from its regular atomic site. It formed during solidification as a result of atomic vibrations and during recovery as a result of local rearrangement of atoms. Vacancies are also introduced during plastic deformation.

Self-interstitial defect in a solid is obtained when an atom in a crystal occupies an interstitial site between surrounding atoms in normal atom sites.

A pure metal consisting of just only one type of atom is not possible; impurity or foreign atoms will always be present, and some will exist as crystalline point defects.

The simplest type of alloy is that of the solid solution. A solid solution is a solid that consists of two or more elements atomically dispersed in a single-phase structure. Impurity point defects are found in two types of solid solutions, namely, i) interstitial and ii) substitutional.

In substitutional solid solution, solute or impurity atoms replace the host atoms. The crystal structure of the parent element or solvent is unchanged.

Schottky Imperfections – When two oppositely charged ions are missing from an ionic crystal, a cation-anion vacancy is created which is known as a Schottky imperfection. 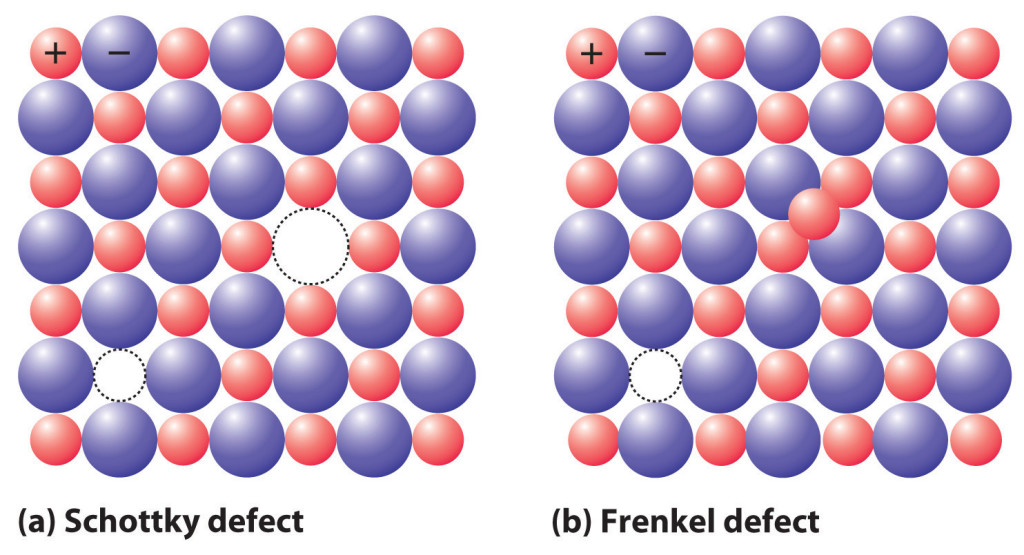 Line imperfections or defects in crystalline solids are defects that cause lattice distortion centered around a line. The main two types of dislocations are edge dislocations and screw dislocation, a combination of these two gives the mixed dislocations.

Most dislocations in crystal are of mixed type having the edge and the screw components with a transition region between them.

i) External Surface – One of the most obvious boundaries is the external surface, along which the structure terminates. Surface atoms are not bonded to the maximum number of nearest neighbors and therefore in a higher energy state than the atoms at interior position. To reduce this energy, materials tend to minimize.

ii) Grain Boundary and Interface – In this defect boundary separates two small grains or crystals having different crystallographic orientation in polycrystalline materials. In metals, grain boundaries are created during solidification, It is a narrow region of about two to five atomic diameters in width. Atomic packing in grain boundaries is lower than within the grains because of the atomic mismatch.

iii) Twin Boundary – Twin  boundary is a mirror reflection  of the atomic arrangement on the other side. Twin boundaries occur in pairs, such that the orientation change introduced by one boundary is restored by the other. The region between twin boundaries is called the twined region. Twins which form during the process of re-crystallization are called annealing twins, Whereas, twins form during plastic deformation are called deformation twins, commonly observed in HCP and BCC crystals.

If A is missing the stacking sequence become ABCABCABC. It is called HCP stacking.

v) Bulk or Volume Defects – These include pores, cracks, foreign inclusion and other phases.

If you have any quarry related to above classification of Defects in Crystal ask here we try to resolve your quarries. Follow us on social media to keep in touch with easy studies and much more.