Want admission in Delhi University ? and confuses too much about how to calculate percentage. Don’t Get confuse just read these rules and fill the form easily. Delhi University Admission for the academic session 2015 begins from May 28 with the availability of online applications. Several candidates must be aspiring for admissions in the undergraduate programmes in the most sought after University. The DU aspirants may be having several queries regarding the admissions including admission procedure, eligibility, calculating your best of four marks and cutoff. You can get answers to every queries related to DU Admissions 2015. So, Don’t do anything wrong to fill up your best of four percentage in DU Admission  form 2015 and read these rules before filling up form. Make sure your method is correct for calculating.

The best of four subjects should include-

i.) One Language (Core/Elective/Functional)
In case a candidate has studied both elective and core in any language(s), then the core language will be treated as language while elective language can be considered as an academic/elective subject

** Accountancy shall be considered equivalent to Commerce wherever any board (such as CBSE) is not offering Commerce as a subject.

# Music will be treated Academic/Elective only for Honours in Music.

1. Admission to certain courses such as B.A. (Hons.) Journalism, B.A. (Hons.) Applied Psychology and B.A. (Hons.) Hindi Patrakrita shall follow the procedure of calculation of the Best of Four Subjects percentage as per certain other subjects, given as follows:

2. For admission to B.Com (Hons.), the Best of Four percentage should include one language (core/elective/functional), the subject Commerce (or Accountancy in case of boards that do not offer Commerce as a subject; eg., CBSE Board) and any other two elective subjects mentioned in the list A. The candidate should have studied and passed Maths at the qualifying level exam in order to be eligible for the admission to the course.

3. Admission to B.A. (Hons.) Social Work will be based on Best of Four Percentage including one language and three academic/elective subjects as per List A.

5. The candidates must have studied and passed Mathematics at qualifying exams for admission to B.A. (Hons.) Economics and Commerce.

6. The University may define any other relevant subjects as Academic/Elective for a particular Honours Course.

Admissions to Honours in any Language Course:

1. For admission to Honours in any language course, an advantage of 2% in the Best of Four percentage may be given to those candidates who have studied the elective language.

2. In case any candidate has not studied the language at qualifying exam and is seeking admission to Honours in that language, he/she may be given a disadvantage of 5% in the Best of Four Percentage.

3. For admissions to Honours in English and Hindi, the candidate must have studied and passed the respective language in the qualifying exam and has to be included for calculation of Best of Four percentage. 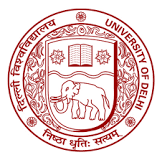 The following subjects have to be included in the calculation of the Best of Four percentage:

ii.) Any three elective subjects can be chosen.
A disadvantage of upto 5% may be imposed on the Best of Four percentage in case of change of stream, which the college will have to notify beforehand by either uploading on their website or informing the University

iii.) For admission to B.A. (Vocational) only, related vocational subjects may be treated at par with academic/elective subjects.

iv.) If a candidate opts for MIL (except Hindi) as a subject, an advantage of 10% may be given in Best of Four in those colleges where MIL is offered as a subject.

i.) The basis of selection for Mathematical Sciences,/Science/Home Science Courses remains unchanged.

ii.) The subjects included for the basis of selection (PCM/PCB/PCMB) must have at least 70% component of theory exam (theory exam does not include internal assessment/continuous evaluation etc.) in the qualifying exam else a disadvantage of 10% shall be imposed on each subject.

Read Carefully your course related section and Calculate easily your “best of four” percentage for as per that method for filling up delhi university admission form.